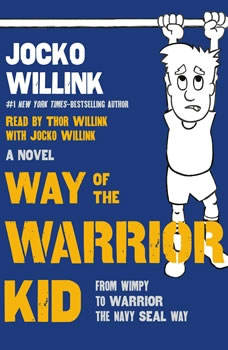 Way of the Warrior Kid: From Wimpy to Warrior the Navy SEAL Way

Series: Way of the Warrior Kid #1

This program is read by Thor Willink with the author, Jocko Willink. Fifth grade was the worst year of Marc’s life. He stunk at gym class, math was too hard for him, the school lunch was horrible, and his class field trip was ruined because he couldn’t swim. But what was most awful thing about fifth grade? Kenny Williamson, the class bully, who calls himself the "King of the Jungle."When Marc's mother tells him that his Uncle Jake is coming to stay for the whole summer, Marc can't wait. Uncle Jake is a for real, super-cool Navy SEAL. And Uncle Jake has a plan.He's going to turn Marc into a warrior.Becoming a warrior isn’t easy. It means a lot of pull ups, sit ups, pushups, squats, swimming, eating right, and studying harder than ever before! Can Marc transform himself into a warrior before school starts in the fall – and finally stand up to the King of the Jungle himself?The Way of the Warrior Kid is a new illustrated chapter book by #1 New York Times-bestselling author and retired Navy SEAL Jocko Willink.

The Possibilities of Sainthood
by Donna Freitas

Antonia Lucia Labella has two secrets: at fifteen she’s still waiting for her first kiss, and she wants to be a saint. An official one. To Antonia, saints are royalty and she wants her chance at being a princess. All her life she’s kept...

The Eleventh Plague
by Jeff Hirsch

In the aftermath of a war, America's landscape has been ravaged and two thirds of the population left dead from influenza. Fifteen-year-old Stephen Quinn and his family were among the few that survived. But when Stephen's grandfather dies and his fa...

The Quilt
by Gary Paulsen

A six-year-old boy goes to spend the summer with his grandmother Alida in a small Minnesota town. With the men all gone off to fight, the women are left to run the farms. There’s plenty for the boy to do – trying to help with the chores;...

There’s nothing All Star pitcher Peter Friedman loves more than baseball. It’s his life. He breathes baseball, dreams about it, and works his tail off to be great. Most kids are nervous about starting high school, but Pete’s amazin...