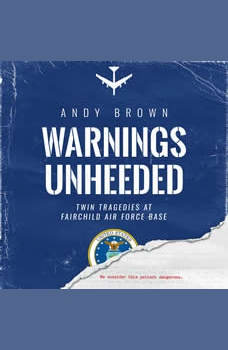 In one week, a community is struck by a deadly shooting spree and a fatal aviation disaster. Tragedies that occurred suddenly... but not without warning.

On 20 June 1994, a "dangerous" airman shot his mental-health doctors before opening fire on the patrons and staff of a military hospital. Days later, a B-52 bomber crashed while performing air-show maneuvers killing the crew and a pilot who was known for his reckless flying.

This suspenseful narrative is the work of former Air Force criminal investigator Andy Brown. As a young military policeman, Brown responded to the base hospital where he sought out the gunman and ended his murderous rampage. After years of research and countless interviews, Brown delivers the complete history of the killing spree and the plane crash and uncovers the leadership culture that allowed two men to travel unchecked on a path toward destruction.

With cinematic clarity, Warnings Unheeded reveals the precursors of violence and disaster, giving a voice to the doctors, aviators, and airmen who warned of the impending tragedies. An extraordinary story of ordinary men and women who became life-saving first responders, victims who fought to survive, and survivors who fought for answers, accountability and change. In a parallel storyline Brown shares how he prepared for the deadly gunfight, describes his encounter with the gunman, and offers a candid insight into the hidden cost of becoming a "hero."