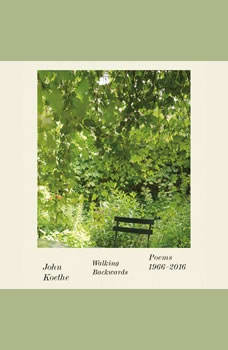 ...There’s something
Comforting about rituals renewed, even adolescents’ pipe dreams:
They’ll find out soon enough, and meanwhile find their places
In the eternal scenery, less auguries or cautionary tales

Than parts of an unchanging whole, as ripe for contemplation
As a planisphere or the clouds: the vexed destinies, the shared life,
The sempiternal spectacle of someone preaching to the choir
While walking backwards in the moment on a warm spring afternoon.

John Koethe’s poems—always dynamic and in process, never static or complete—luxuriate in the questions that punctuate the most humdrum of routines, rendering a robust portrait of an individual: complicated, quotidian, and resounding with truth. Gathering for the first time his impressive and award-winning body of work, published between 1966 and 2016, Walking Backwards introduces this gifted poet to a new, wider audience.