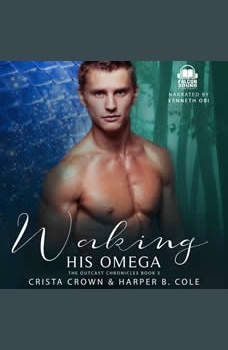 This is the end, Simon thought. Not if I can help it, I responded.

After thousands of years asleep in the ice, Ryeth the Sapphire Dragon is waking, and it's the touch of one man's mind that draws him from his dreams. But Ryeth's body is still trapped, leaving him powerless to address the issue of his brother, the Black Dragon, who has already threatened Simon's pack.

Simon didn't realize how alone he felt until Ryeth bonded with him, and now he doesn't know how to function without the dragon's voice in his head. But a yearning for more burns in his gut, and he doesn't know what to do about it.

As the threat of the Black Dragon looms ever greater, Simon must find a way to free Ryeth. It's not only his pack and family that is at stake, but the chance of a future with the dragon he has linked his soul to.

Waking His Omega is a 27k word novella featuring a wise-cracking wolf who is learning what responsibility means, the ancient dragon who lives half in his mind, and the rest of the pack as they face their greatest foe. It is the fifth book in the Outcast Chronicles, and it is recommended to read them in order for maximum enjoyment. This book contains mpreg, knotting, and a peeping tom dragon who can't keep his dirty thoughts out of Simon's head.