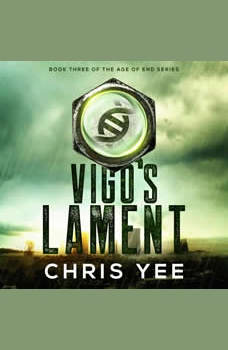 A secret weapon. A mission of revenge. A deadly final choice.

Vince has a burning need for retribution. After a deadly double-cross left his companion dead, he’s desperate to destroy the rebel army and their vicious leader. But when he discovers a young captive who may be the key to a villainous plot, he doesn’t expect her secret to change him forever…

Forced to confront the true cost of his immortality, Vince vows to end the terror created by those in charge. But once and for all claiming his vengeance may require destroying an innocent girl.

As the death toll rises, can Vince defeat a monster without becoming one himself?

Vigo's Lament is the third book in the Age of End series of dystopian sci-fi novels. If you like gritty action, darkly-wrought worlds, and heroes that battle for payback, then you’ll love Chris Yee’s explosive thrill-ride.

A timid robot. A human scavenger. To survive the war-ravaged landscape, two enemies must work together.Household robot Silas is in serious need of a safe haven. After a brutal war that has pitted man against machine and ended with no clear winn...