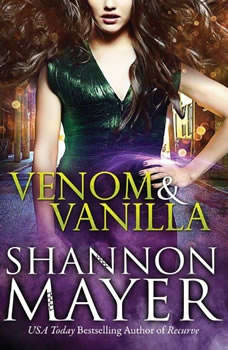 Successful Seattle baker Alena Budrene doesn’t want to die. But when she’s infected with a lethal virus spread by supernatural beings, her only chance for recovery is to make a deal with the devil—or in this case, a warlock.Though he saves her life, it looks nothing like the life she once knew—and neither does she. Alena is a new breed of “Supe” no one has ever seen before. Even the supernatural police don’t know what she is. Now exiled to the northern side of the Wall, which marks the divide between humans and Supes, Alena is thrust into a dark and magical new world.But just as she begins to adjust to all things supernatural, she realizes that her transformation is the least of her worries—and it was no accident. She was chosen…to be killed by a Greek hero trying to make a name for himself once more.Alena was brought up to be subservient, preferring creating to fighting, and vanilla and honey to blood. But that was then. Now, to survive, she must stand up for herself—and this time she’s got fangs. But will she be ready to use them?

Fangs and Fennel
by Shannon Mayer

The delicious sequel to Venom and Vanilla, from USA Today bestselling author Shannon Mayer.Alena Budrene is not just a gifted Seattle baker—she’s also a supernatural. Having survived the virus that made her transformation necessary and o...

Hisses and Honey
by Shannon Mayer

The climactic final volume of The Venom Trilogy by USA Today bestselling author Shannon Mayer.Humble baker turned supernatural Alena Budrene is lovely and lethal, and for the first time, she’s owning it. Finally rid of her low-life ex-husband,...