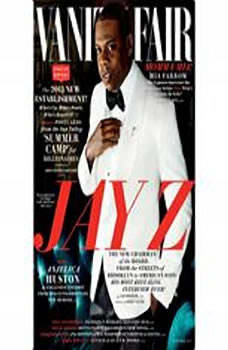 Vanity Fair is a cultural filter, sparking the global conversation about the people and ideas that matter most. With a dedication to journalistic excellence and powerful storytelling, Vanity Fair is the first choiceoften the only choicefor the worlds most influential and important audience. From print to social media, the big screen to the smartphone and now on audio, Vanity Fair is the arbiter of our era. This months issue features: Cover Story: Jay Zs most revealing interview ever. Anjelica Hustons memoir: the Oscar-winning actress recalls her cinematic youth. Exclusive: Mia Farrow opens up on life before and after Woody Allen. And more! Articles include: Editors Letter, Read by Graydon Carter In the Details: What You Should Know about Kai Ryssdal Out to Lunch with Giancarlo Giammetti Chronicle of Death Retold The View from Hockney Jay Z Has the Room Momma Mia! V.F. Portrait: Donna Tartt Designing Men Look Homeward, Anjelica