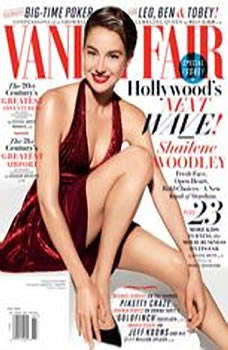 Vanity Fair is a cultural filter, sparking the global conversation about the people and ideas that matter most. With a dedication to journalistic excellence and powerful storytelling, Vanity Fair is the first choice-often the only choice-for the world's most influential and important audience. From print to social media, the big screen to the smartphone and now on audio, Vanity Fair is the arbiter of our era.This month's issue features: Hollywood's Next Wave: Shailene Woodley, who carries this month's The Fault in Our Stars, plus 23 more kids headed for fame Exclusive: A showbiz gambling queen on some of Hollywood's highest rollers 21st-Century Travel: Inside the Dubai International Airport 20th-Century Adventuress: The life of Clare Boothe Luce Art Establishment: Uncovering Jeff Koons Plus: The Thomas Piketty craze and Donna Tartt's Goldfinch backlash