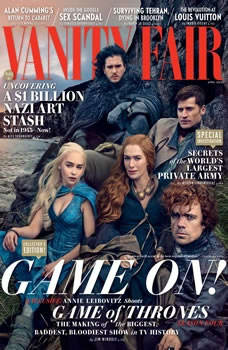 Vanity Fair is a cultural filter, sparking the global conversation about the people and ideas that matter most. With a dedication to journalistic excellence and powerful storytelling, Vanity Fair is the first choice-often the only choice-for the world's most influential and important audience. From print to social media, the big screen to the smartphone and now on audio, Vanity Fair is the arbiter of our era.This month's issue features: Exclusive: The behind-the-scenes story of the making of Game of Thrones-TV's biggest, baddest, and bloodiest show Silicon Valley: Inside the Google sex scandal Fashion: The revolution at Louis Vuitton Special Investigation: Secrets of the world's largest private army Plus: Uncovering a $1 billion Nazi art stash