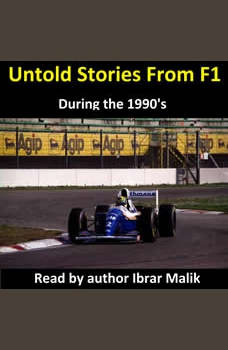 Untold Stories From F1 During the 1990's

Grand Prix Racing during the 1990’s was among one of the best era’s of the sport. Not only did you have great F1 drivers & loud F1 engines (like the old V12’s) which not only excited fans, but, the sport was full of colourful characters and it was an era before people were afraid of watching their words. This book therefore captures some forgotten, yet fascinating short stories from that time that will make you laugh, cry or even just ponder. They include:

Since 2015 I’ve been researching all the books, internet sources and magazines (Autosport, F1 News and Motor Sport) covering 1990’s F1. Furthermore I’ve interviewed various key figures employed by Benetton, Ford Electronics and Williams. In addition, I’ve studied all the on track action from time – simply because I love reliving that era of F1. This book & its short stories listed above are the fruits of all that hard work and research.

As a devoted Formula 1 fan, I thought I knew everything about the sport from the 1990’s before starting this project. But since interviewing those involved it soon became apparent how much had yet to be made public. I’ve resigned from my day job purely to write this book. That is h

This entry in a brand new line of sports biographies from Matt Christopher takes readers onto the court with an all-star who reaches for new heights Blake Griffin is known for being a #1 draft pick, Rookie of the Year, Slam Dunk Contest winner, and...