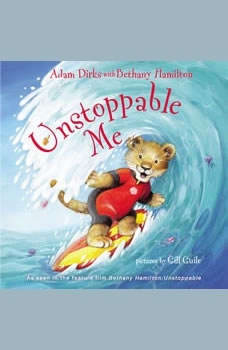 Unstoppable Me, written by New York Times bestselling author and champion surfer Bethany Hamilton with husband, Adam Dirks, tells the story of Makana the lion, who loves to surf but loses her nerve when she wipes out. When her friend encourages her to go back out again, Makana summons up the courage and discovers the success that comes from believing in yourself and never giving up.

As seen in the feature film Bethany Hamilton: Unstoppable, this playful board book with foiled padded cover will have little ones cheering for Makana and inspire them to stay strong and keep trying, no matter what challenges might come their way.

Wolves of the Beyond #2: Shadow Wolf
by Kathryn Lasky

The wolf pup Faolan was born with a twisted paw, a slight defect that caused his wolf clan to abandon him in the forest to die. But Faolan, with the help of the grizzly bear who raised him as her own, survived. Now he's made it back to his clan and...

Yertle the Turtle
by Dr. Seuss

Dr. Seuss presents three modern fables in the rhyming favorite Yertle the Turtle and Other Stories. The collection features tales about greed (“Yertle the Turtle”), vanity (“Gertrude McFuzz”), and pride (“The ...

A young wolf seeks the bravery to be himself in this lyrical homage to challenging societal stereotypes, from the author of National Book Award Finalist Mean Margaret and The Wainscott Weasel.Wolves. Predators of the wild. Stalkers of the forests. B...

Princess Cora and the Crocodile
by Laura Amy Schlitz

A Newbery Medalist and a Caldecott Medalist join forces to give an overscheduled princess a day off - and a deliciously wicked crocodile a day on. Princess Cora is sick of boring lessons. She's sick of running in circles around the dungeon gym. She'...

Fox in Socks
by Dr. Seuss

A collection of tongue twisters that will amuse little ones.

The Pout-Pout Fish
by Deborah Diesen

The #1 bestselling chapter book series of all time celebrates 25 years with new covers and a new, easy-to-use numbering system! Tigers in trouble? That's what Jack and Annie find when the Magic Tree House whisks them and Teddy, the enchanted d...

Chet Gecko has always loved a good mystery. Like how do you squeeze ketchup into those little plastic packets? And, who put the boom in Shaka-laka-boom-boom?If there is a mystery to be solved, Chet's the one to do it. Who is he? Chet Gecko - Private...

The Tiger Rising
by Kate DiCamillo

From the best-selling author of Because of Winn-Dixie comes the moving story of an eleven-year-old-boy, Rob Horton, who finds a caged tiger in the woods behind the hotel where he lives with his father. With the help of his new friend, Sistine Baile...