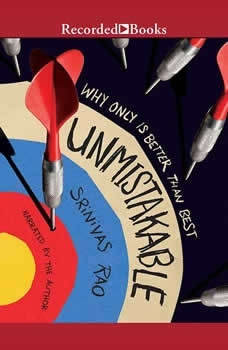 Unmistakable: Why Only Is Better Than Best

After getting rejected from many business schools and fired from several sales jobs, Srinivas Rao decided to stop doing what he thought he was supposed to do and start working in a way that felt honest. He launched the Unmistakable Creative Podcast to interview some of the greatest minds in business--including Seth Godin, Simon Sinek, Pam Slim, Elle Luna, and Ryan Holiday--finding a surprisingly big audience. This book distills the lessons, anecdotes, and insights of the 500+ people he has interviewed. Unmistakable art needs no signature. As soon as it's in front of you, you know exactly who created it, like Banksy's street art or Tim Burton's films. Whether you're a business owner, artist, or anything in between, when your work is unmistakable, your competition becomes irrelevant. They can't copy you. The key to being unmistakable is to stop trying to be the best--because that would mean you're sticking to plans and rules that have already been set for you, choosing what's safe and reliable. Rao argues that your most meaningful, impactful, and joyful work exists outside the "being the best" mindset, if you can strip away the expectations and pressure that you've internalized--to lead you to be the only.

The 12 Secrets of Self-Made Multi-Millionaires
by Denis Waitley

In this program, Denis Waitley reveals 12 common traits that he has discovered in self-made, multi-millionaires which make them so uncommonly successful and enduring. Several of these secrets appear so obvious that he wonders why less than 10 percen...

Launch Your Dream
by Dale Partridge

Successful Companies are Externalizations of the Identities of their Owners
by J.-M. Kuczynski

80/20 Principle: The Secret to Working Less and Making More
by Paul J. Stanley

Learn how to optimize everything you do from the get-go! Today only, get this audio bestseller for a special price. You can either think that’s unfair or you can use it to your advantage. If you’re reading this, you’re one of the...

The One Minute Entrepreneur
by Ken Blanchard

Rework shows you a better, faster, easier way to succeed in business. Most business books give you the same old advice: Write a business plan, study the competition, seek investors, yadda yadda. If you're looking for a book like that, put ...

Cryptocurrency For Beginners: A Complete Guide To Understanding The Crypto Market From Bitcoin, Ethereum And Altcoins To Ico And Blockchain Technology
by Michael Scott

Understand the new world of crypto, so that you can take advantage of this revolutionary new financial age that is emerging! Today only, get this audio bestseller for a special price. We have come into a new world, a new age. This is the smart ag...

“This excellent book is a must-read for current and aspiring entrepreneurs.”—BooklistDiscover how to turn a great idea into a thriving business with The E-Myth Enterprise, using the proven methods that bestselling author Michael&#...

The basics for property investment - How to calculate yield, capital gain, and get a strong rental return. Get closer to your property dream. Today only, get this audio bestseller for a special price. Looking to purchase and profit from a resident...