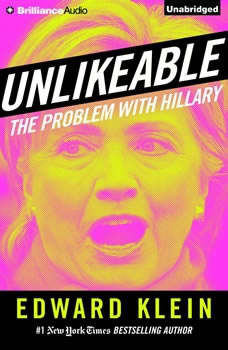 Unlikeable: The Problem with Hillary

From the author of the #1 New York Times bestsellers The Amateur and Blood Feud.…Unlikeable is the stunning, powerful exposé of Hillary Clinton and her floundering race for the White House. With unprecedented access to longtime associates of the Clintons and the Obamas, investigative reporter Edward Klein meticulously recreates conversations and details of Hillary Clinton's behind-the-scenes plotting in Chappaqua and Whitehaven. Klein, the former editor in chief of New York Times Magazine and a contributing editor to Vanity Fair, draws a deeply troubling portrait of Hillary Rodham Clinton, a highly unlikeable presidential candidate and a woman more associated with scandal than with accomplishments, with lying than with truth, with arrogance than with compassion.

Our Lost Constitution
by Mike Lee

The still-unfolding story of America’s Constitution is a history of heroes and villains—the flawed visionaries who inspired and crafted liberty’s safeguards, and the shortsighted opportunists who defied them. Those stories are know...

The Death of Liberalism
by R. Emmett Tyrrell Jr.

America’s founders risked their lives to give us a republic — and dared us to keep it. But for more than a century, an insidious force has done its worst to rip the republic asunder: a movement of elites, academes, and politicians bent o...

"A faithful reflection of Che as he was, or, better, as he developed." (Joseph Hansen)In 20 speeches, interviews, and letters, Guevara dissects the workings of the imperialist system with scientific clarity, unflinching truthfulness, and biting humo...