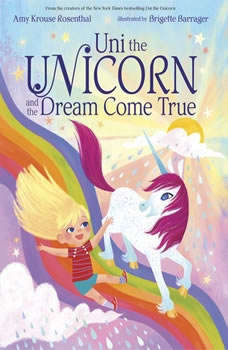 Uni the Unicorn and the Dream Come True

Amy Krouse Rosenthal and Brigette Barrager reunite to bring us a sparkly, magical sequel to Uni the Unicorn!

The Land of Unicorns is in trouble -- it has been raining and raining for what seems like forever. This is a big problem because there are only three ways that unicorns can get their magic: from the golden sun, from magnificent rainbows, and from the sparkle of believing.

Luckily, Uni the Unicorn has always always always believed...that little girls are REAL. Join this very special unicorn and the little girl who believes right back as they finally meet and work together to save a magical land and all who live there!

Amy Krouse Rosenthal and Brigette Barrager reunite to revive this world glowing with possibility and hope that is the stuff of childhood fantasies.