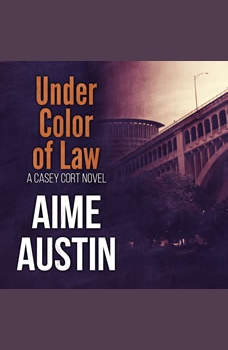 Under Color Of Law

The Brody family destroyed her. Now they want her back. Losing the most high profile case of her career ironically made Casey Cort a winner. Well-heeled clients now knock on her door, and Tom Brody, her rich ex-boyfriend, wants her back. But entry into the upper echelon comes at a price. The newest assistant United States attorney, Miles Siegel, has set his sights on nailing a public figure he believes to be corrupt: Cuyahoga County Juvenile Court Judge Eamon Brody. But Brody’s brothers, one the presiding judge of the county, the other the state attorney general, aren’t about to let that happen. When Casey gets retained by single mom Claire Henshaw, to wrest custody from her son’s irresponsible father, Casey handles her first case before the controversial judge . . . and learns something that will force her to make the hardest decision of her life. In this installment of the Casey Cort series, Aime Austin—a former trial lawyer in Cleveland—weaves a tale that blends the best of today’s top legal thrillers with the heart and soul of women’s fiction, in a story ripped from real-world headlines.

Days You Wish You Could F**ck Someone UP: When You Become Tired of People Sh* t
by Raymoni Love

The world has always been violent, and through violence nations and leaders have expressed their vexation across to those that pissed them off. I know today, the women of the entertainment industry would love to kick the Ass of the people that se...

Love Can Make You Feel Good: The Sensual, The Sexy and The Romantic Side of Love
by James Patterson

Has society really forgot how to love? Have any of your perceptions of what love change because of social media, hate, or heartache? Love is beautiful, but how many of us express love, has changed, and exploring the essential parts of love is what t...

Erotica As You Like It: Secret House Wife Conjure a Creative Man
by Thoth Charles

Would You Like To Start Climbing The Real Estate Rental Ladder?Property investment is one of the most lucrative ways to make money - but only if you know what you are doing.It is so easy to get it wrong by buying in a bad location, paying too much f...

The Black Star of Kingston: Tales of Old Natalia 1
by S. D. Smith

Over a century before Heather and Picket's adventures in The Green Ember, a displaced community fights for hope on the ragged edge of survival.My place beside youMy blood for yoursTill the Green Ember risesOr the end of the world.Whitson Mariner and...