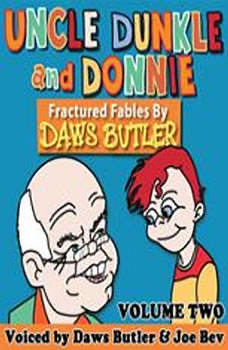 This second collection of fractured fables are from the unique mind of Daws Butler, the man who voiced most of the classic Hanna-Barbera charactersYogi Bear, Huckleberry Hound, Quick Draw McGraw, and Snagglepuss, to name a few. Uncle Dunkle and Donnie is a collection of imaginative cartoon scripts by Butler, who also worked on Jay Wards classic 1960sFractured Fairy TalesandAesop and Sonsanimated cartoons. This set features rare, never-before-released recordings of Daws Butler himself, along with three bonus tracks: two new Uncle Dunkle fables voiced by Butler protg Joe Bevilacqua and written by Pedro Pablo Sacristan, and a live performance before an audience by Joe Bevilacqua, Nancy Cartwright, Corey Burton, and June Foray.