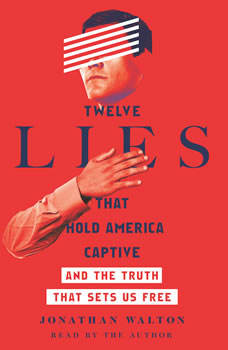 Twelve Lies That Hold America Captive: And the Truth That Sets Us Free

"America is a Christian nation." "All men are created equal." "We are the land of the free and the home of the brave." Except when we're not. These commonly held ideas break down in the light of hard realities, the study of Scripture, and faithful Christian witness. The president is not the messiah, the Constitution is not the Bible, and the United States is not a city on a hill or the hope for the world. The proclaimed hope of America rings most hollow for Native peoples, people of color, the rural poor, and other communities pressed to the margins. Jonathan Walton exposes the cultural myths and misconceptions about America's identity. Focusing on its manipulation of Scripture and the person of Jesus, he redirects us to the true promises found in the gospel. Walton identifies how American ideology and way of life has become a false religion, and shows that orienting our lives around American nationalism is idolatry. Our cultural notions of life, liberty, and the pursuit of happiness are at odds with the call to take up our cross and follow Jesus. Ultimately, our place in America is distinct from our place in the family of Jesus. Discover how the kingdom of God offers true freedom and justice for all.

Wages of Rebellion
by Chris Hedges

Revolutions come in waves and cycles. We are again riding the crest of a revolutionary epic, much like 1848 or 1917, from the Arab Spring to movements against austerity in Greece to the Occupy movement. In Wages of Rebellion, Chris Hedges—who ...