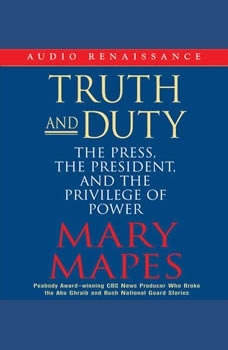 Truth and Duty: The Press, the President, and the Privilege of Power

A riveting account of how the public's right to know is being attacked by an unholy alliance among politicians, news organizations and corporate America, from the producer at the heart of the 60 Minutes/George Bush National Guard controversy.For twenty five years, Mary Mapes has been an award-winning television producer and reporter—the last fifteen of them for CBS News, principally for the CBS Evening News with Dan Rather and 60 Minutes. She had the bedrock of respect of her peers—in the last year alone, she broke the story of the Abu Ghraib prison tortures (which won CBS The Peabody Award) and the existence of Strom Thurmond's illegitimate bi-racial daughter Essie Mae Washington. But it was Dan Rather's lightning rod of a story on George W. Bush's National Guard Service that brought Mapes into an unwanted limelight. The firestorm that followed the broadcast led not only to Mapes' firing and Rather's stepping down from his anchor chair a year early, but to an unprecedented "internal" inquiry into the story—chaired by former Reagan Attorney General Richard Thornburgh.Peopled with an historic and colorful cast of characters—from Karl Rove to Summer Redstone to John Kerry to Col. Bobby Hodges—this groundbreaking book about how the news is made (and unmade) will make news when it appears this fall. But this, it turns out, is only part of the story. Mapes talks for the first time about the riveting behind-the-scenes action at CBS during this frenzied period and exposes some of the largest political and social controversies that have broken in this new age of dissonance.