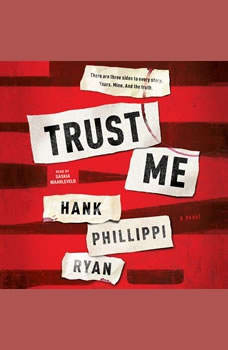 "Saskia Maarleveld's well-paced narration keeps listeners on the edge of their seats throughout the story's many twists and turns, psychological manipulation, and misdirection." — AudioFile MagazineTrust Me is the chilling standalone audiobook of psychological suspense and manipulation that award-winning author and renowned investigative reporter Hank Phillippi Ryan was born to write.An accused killer insists she's innocent of a heinous murder.A grieving journalist surfaces from the wreckage of her shattered life. Their unlikely alliance leads to a dangerous cat and mouse game that will leave you breathless.Who can you trust when you can't trust yourself?This program includes a bonus interview with the author."Grief and deception are at the helm of Hank Phillippi Ryan’s latest thriller, Trust Me, in which a crime writer and an accused criminal’s lives collide, as they come to discover that no one can be trusted, not even oneself." -- Mary Kubica, New York Times bestselling author of The Good Girl