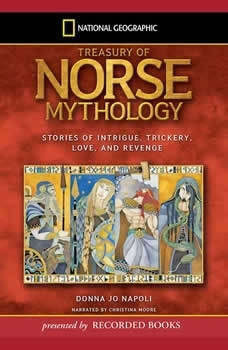 Classic stories and dazzling illustrations of gods, goddesses, heroes and monsters come to life in a stunning tableau of Norse myths, including those of the thunder god Thor, the one-eyed god and Allfather Odin, and the trickster god Loki. The lyrical storytelling of award-winning author Donna Jo Napoli dramatizes the timeless tales of ancient Scandinavia. This book is the third in the trilogy that includes the popular National Geographic Treasury of Greek Mythology and National Geographic Treasury of Egyptian Mythology.

Jack the Lumberjack finds a hidden object....When the forest is burnt and Jack has to look for a new way to generate an income, he finds himself wrestling with the forces of nature and the powers of a mysterious object. He uses the tool to his advan...

A Giant Problem
by Holly Black

Nick and Laurie have a giant problem and it's a lot bigger than they originally thought.  When Taloa sent them off to find her sisters, they discovered a single fire breathing giant, but as it turns out, that one giant is just the tip of t...

Tinsey Clover is smart. She’s brave. Also, she can’t carry a tune to save her life. Oh yeah, plus she's an elf the size of a chipmunk. When her bizarre magical power grows in and makes her feel like a total outsider in her own village, T...

The Prince of the Pond
by Donna Jo Napoli

From the author of The Magic Circle, Zel, and Stones in Water.Who is that handsome green stranger? None of the pond dwellers has ever seen the peculiar new frog before. They found him sitting in a pile of human clothes outside the hag’s h...

Ragnar Lothbrok: The Tale of a Viking Warrior King delves into the mystery surrounding the Viking warrior who conquered European nations and became a king in his own right. Over nine centuries after the death of this great warrior, ancient poem...

The new "National Geographic Treasury of Egyptian Mythology" is a stunning tableau of Egyptian myths, including those of pharaohs, queens, the boisterous Sun God Ra, and legendary creatures like the Sphinx. The lyrical storytelling of award-winning ...