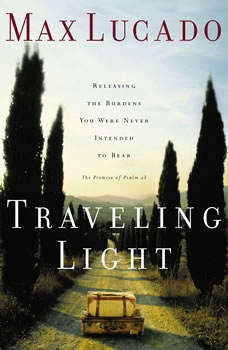 Traveling Light: Releasing the Burdens You Were Never Intended to Bear

Weary travelers. You've seen them -- everything they own crammed into their luggage. Staggering through terminals and hotel lobbies with overstuffed suitcases, trunks, duffels, and backpacks.

At times, we are people like that -- if not with our physical luggage, then at least with our spiritual load.

We all lug loads we were never intended to carry. Fear. Worry. Discontent. No wonder we get so weary. We're worn out from carrying that excess baggage. Wouldn't it be nice to lose some of those bags?

That's the invitation of Max Lucado. With the Twenty-third Psalm as our guide, let's release some of the burdens we were never intended to bear.

Using these verses as a guide, Max Lucado walks us through a helpful inventory of our burdens. May God use this Psalm to remind you to release the burdens you were never meant to bear.

Don't Give Up
by Kyle Idleman

The parent with the wayward child. The couple whose marriage is in jeopardy. The man who is out of work. The woman stuck in crushing debt. The patient with a bad diagnosis. The student who can't get a fair shake. People hanging by a thread, losi...

Anxious for Nothing
by Max Lucado

When it comes to anxiety, depression, and stress-related illnesses, America is the frontrunner. Thankfully, there’s a practical prescription for dealing with them. Anxious for Nothing, the most recent book from New York Times bestselling autho...

Millions of people are wasting their lives pursuing dreams of happiness that don't rise above a good marriage, nice kids, a successful career, a nice car, fun vacations, nice friends, a fun retirement, a painless death, and (hopefully) no hell. John...

Lost and Found
by Sarah Jakes

Like every girl, Sarah Jakes dreamed of a life full of love, laughter, and happy endings. But her dreams changed dramatically when she became pregnant at age thirteen, a reality only compounded by the fact that her father, Bishop T.D. Jakes, was one...

The Promise of Security
by Beth Moore

The Prayer of Jabez
by Bruce Wilkinson

I Am N
by The Voice of the Martyrs

Yousef, whose mother threatened to kill him for having a Bible, now smuggles Bibles the way his family once smuggled drugs.After Parveen’s employer beats her for attending church, Parveen begins to help other young Christian women who work in ...

A Shepherd Looks at Psalm 23
by W. Phillip Keller

The Lord is my shepherd, I shall not be in want a€¦a€Travel the shepherda€™s path to the green pastures and cool, refreshing waters of Psalm 23.As a shepherd, Phillip Keller shares his insights into the life and character...