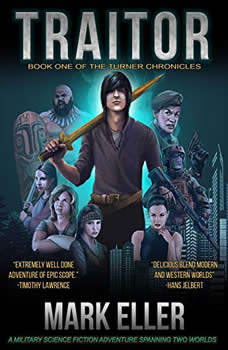 On the edge of a far frontier rests a place of gentle manners and common civility--Last Chance. Threats of war change all of that. A hero is needed. A Savior. Meet Aaron Turner, the small unassuming man who runs the Last Chance General Store. He may not be all that they hoped for.

From the reviews on this miltary science fiction time travel adventure:

This book is one of my favorite books I've read over the last year. It was detailed, captivating, and emotive. -Johnathon K

This is definitely a science fiction series to be explored, and one that women in particular might enjoy. - Examiner

I should complain to the author, though. I read the book until 4 in themorning on two consecutive nights, wiping me out for work at 9. I just could not put it down. - Sci/fi & Fantasy Reviews

Eller shows that no matter how torn we are between what life offers and what we want, that is no excuse not to do our best. - Conversations Book Club