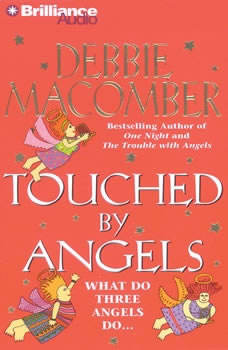 #1 New York Times bestselling author Debbie Macomber—winner of numerous accolades and honors, including the Romance Writers of America’s Nora Roberts Lifetime Achievement Award—writes romance novels that warm the heart and lift the spirit like none other. In Touched by Angels, the beloved author of Mrs. Miracle showcases three of her most popular characters: the well-meaning if somewhat dizzy heavenly helpers, Shirley, Goodness, and Mercy. Macomber’s delightful angelic trio alights in New York City in Touched by Angels, and before they re-enter the Pearly Gates, they need to answer the prayers of a troubled school teacher, a shy and lonely young woman, and a wannabe Broadway actress a long way from home.“Debbie Macomber writes characters that are as warm and funny as your best friends.” —Susan Wiggs“Debbie Macomber’s name on a book is a guarantee of warm-hearted, endearing romance that will captivate and charm her legions of readers.” —Jayne Ann Krentz

The Trouble with Angels
by Debbie Macomber

When those irrepressible angels—Shirley, Goodness, and Mercy—set out for the City of Angels to grant three rush Christmas prayers, they soon find it will take more than one miracle to teach their precious lessons of love—as well as...