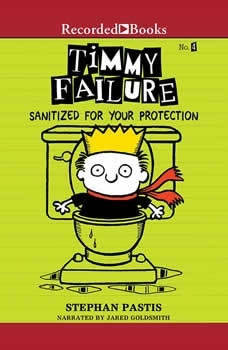 Timmy Failure: Sanitized for Your Protection

Some surprising news sends Timmy Failure on a hilarious caper as the New York Times best-selling series continues. Behold! You are all about to be witnesses to greatness. In this fourth volume of Timmy Failure's memoirs, Timmy is forced to hit the road in a cross-country trip that includes Timmy's mom, Total the polar bear, Doorman Dave, and smells-like-a-tangerine criminal mastermind Molly Moskins. It's a world gone mad, where good becomes bad, and Timmy Failure is a condemned man. Someone call the authorities. . .

The New York Times bestselling cartoonist behind the nationally acclaimed comic strip Pearls Before Swine, Stephan Pastis has won raves for Timmy Failure, the hilarious first book in a new series for young readers. With the help of a polar bear name...

Diary of an Odd Enderman Book 2: An Unofficial Minecraft Book
by Mr. Crafty

The Adventure Continues With Your Favorite Enderman!This odd Enderman finally receives an official name that he will forever go by. After escaping a heat-filled environment where his last diary ended, his new adventures have become more thrilling, d...

The Case of the Bicycle Bandit
by James Preller

James Preller's wry, witty, Jigsaw Jones chapter book mysteries are once again available to inspire the next generation of young readers, featuring both new titles and classroom classics! The Case of the Bicycle Bandit Why would anyone steal an old ...

His name is Failure. Timmy Failure. And his detective agency is on the verge of global domination. Global riches. Global fame. And yet the gods keep throwing him curveballs: for starters, academic probation. The coveted Miracle Report is the key to ...