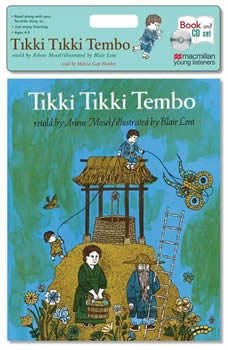 This humorous retelling of a favorite folktale recounts how the Chinese came to give their children short names. Beautifully illustrated, this perfect read-aloud storybook is one adults and children will enjoy sharing together again and again.When the eldest son fell in the well and most of the time getting help was spent pronouncing the name of the one in trouble, the Chinese, according to legend, decided to give all their children short names. Tikki tikki tembo-no sa rembo-chari bari ruchi-pip peri pembo is the name of a mother's first, and most honored, son. It means, "the most wonderful thing in the whole wide world!"

People just can't live together without telling stories. We tell stories that are funny, ironic, insightful, or just simply pleasing to the tongue and ear. Stories just seem to happen. When a story happens with the force of universality, it finds it...

A young woman, mistreated by her stepmother and stepsisters, but carrying within her a good and gracious heart, wins the love of prince with the help of her fairy godmother. The original tale of Cinderella was written by Charles Perrault, inventor ...

Coleen Salley's wonderful Epossumondas books are audio treats for young listeners. Mama is preparing a birthday cake for her sweet patootie, when she realizes she's out of baking soda. So she sends two friends to the store to help out, but neither r...

Pat Mora, recipient of the Americas Award for Children's and Young Adult Literature, weaves the culture of the American Southwest into the charming tale of DoNa Flor, a giant woman with a giant heart to match. She would do anything for her friends, ...