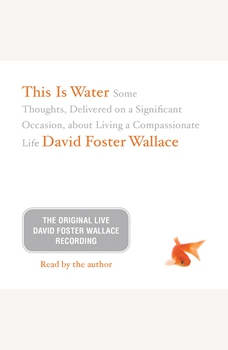 This Is Water: The Original David Foster Wallace Recording: Some Thoughts, Delivered on a Significant Occasion, about Living a Compassionate Life

Only once did David Foster Wallace give a public talk on his views on life, during a commencement address given in 2005 at Kenyon College. This is the audio recording of David Foster Wallace delivering that very address. How does one keep from going through their comfortable, prosperous adult life unconsciously? How do we get ourselves out of the foreground of our thoughts and achieve compassion? The speech captures Wallace's electric intellect as well as his grace in attention to others. After his death, it became a treasured piece of writing reprinted in The Wall Street Journal and the London Times, commented on endlessly in blogs, and emailed from friend to friend.Writing with his one-of-a-kind blend of causal humor, exacting intellect, and practical philosophy, David Foster Wallace probes the challenges of daily living and offers advice that renews us with every listen.

100% Me: Mentally
by Speak Audibly

How do we live positively in a world where negativity sells? How do we control our own thoughts when we're programmed by the media? How do we believe in ourselves when the world tells us we aren't good enough? With all of these unanswered questions,...

Panic Attacks Have an Objective Basis
by J.-M. Kuczynski

People have panic attacks when they are in a situation in which they are actually threatened but where they cannot admit as much without having to forfeit an inflated self-concept.

If You’ve Recently Come Across The Concept Of Stoicism And Would Like To Learn How You Can Use It To Manage Your Emotions And Responses Better, Become Happier, Calmer, Wiser And Have Better Perseverance, This Audiobook Is For You So Keep Readi...

A gargantuan, mind-altering comedy about the Pursuit of Happiness in America set in an addicts' halfway house and a tennis academy, and featuring the most endearingly screwed-up family to come along in recent fiction, Infinite Jest explores essenti...

On Tennis
by David Foster Wallace

David Foster Wallace's extraordinary writing on tennis, collected for the first time in an exclusive digital-original edition. A "long-time rabid fan of tennis," and a regionally ranked tennis player in his youth, David Foster Wallace wrote about t...

Use Intuition and Prophecy To Improve Your Life-By An Adept
by Martin K. Ettington

Welcome to this book about intuition and prophecy. My first book on the Topic was over ten years ago and is titled “Prophecy: A History and How to Guide”. That one was a general overview of the topic. This book is much more focused on ho...