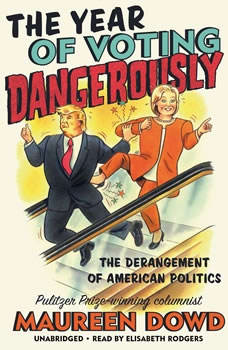 The Year of Voting Dangerously: The Derangement of American Politics

Maureen Dowd's incendiary takes and takedowns from 2016--the most bizarre, disruptive and divisive Presidential race in modern history.Trapped between two candidates with the highest recorded unfavorables, Americans are plunged into The Year of Voting Dangerously. In this perilous and shocking campaign season, The New York Times columnist traces the psychologies and pathologies in one of the nastiest and most significant battles of the sexes ever. Dowd has covered Donald Trump and Hillary Clinton since the '90s. She was with the real estate mogul when he shyly approached his first Presidential rope line in 1999, and she won a Pulitzer prize that same year for her penetrating columns on the Clinton impeachment follies. Like her bestsellers, Bushworld and Are Men Necessary?, THE YEAR OF VOTING DANGEROUSLY will feature Dowd's trademark cocktail of wry humor and acerbic analysis in dispatches from the political madhouse. If America is on the escalator to hell, then THE YEAR OF VOTING DANGEROUSLY is the perfect guide for this surreal, insane ride.

Inside the Circus--Romney, Santorum and the GOP Race: Playbook 2012 (POLITICO Inside Election 2012)
by Mike Allen

Trump 2024 - The ultimate nightmare. That's what some are calling the prospect of another four years of Donald Trump as President.Certainly, whichever side of the political spectrum you're on, it's clear his opinion notwithstanding, that T...

New Hampshire-a small state with a small, distinct population-is nevertheless the beacon of American democracy. Since 1920, its residents have been the first in the nation to cast their votes in the presidential primaries. History has shown that if...

The news is filled with stories of violence, division, and despair. American politics have become polarized. Effective leadership is in short supply. Change may seem outside our reach. And Christians struggle to understand their role in reversing th...

Everything You Think You Know About Politics...and Why You Were Wrong
by Kathleen Hall Jamieson

From a media expert and network commentator, an engaging guide through the welter of misinformation-generated by politicians and the media alike-that surrounds political campaigns Here, at last, is the book for anyone who ever wondered how the media...

Trump vs. Clinton: In Their Own Words
by James Patterson

"Our commander in chief has to be able to defend our country, not embarrass it."*-Hillary Clinton "She doesn't have strength. She doesn't have the stamina. . . . I think she's an embarrassment."**-Donald TrumpIn this presidential contest of diametr...

A series of on the 2012 presidential election, POLITICO’s Playbook 2012 provides an unprecedented real-time account of the race for the White House. The third edition, Obama’s Last Stand, follows the reelection campaign of President...