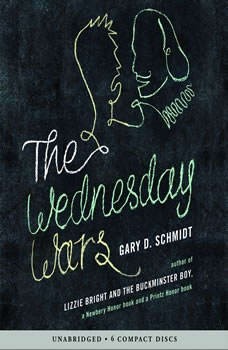 Holling Hoodhood is really in for it. He's just started seventh grade with Mrs. Baker, a teacher he knows is out to get him. The year is 1967, and everyone has bigger things to worry about, especially Vietnam. Then there's the family business. As far as Holling's father is concerned, the Hoodhoods need to be on their best behavior: the success of Hoodhood and Associates depends on it. But how can Holling stay out of trouble when he has so much to contend with? Rats, for one thing; cream puff, for another. Then there's Doug Swieteck's brother. That's just for starters.

It has been far too long that a story made me laugh out loud the way this one has. On the surface it's about a boy staying in school and reading Shakespeare with his teacher. But there's so much more. The quest for cream puffs. Betrayal, friendship, yellow tights, the Vietnam War, sexism, and being a Presbyterian. It's fantastic. You will not regret the time you spend on this story. Joel Johnstone does a very good job.

What a wonderful book. I listened to the audio version and the reader was outstanding- perfect for the part. On the surface, it's about the developing relationship between a 7th grade boy and his teacher. Yet it covers so many topics- life as a teenager, the Vietnam War, family relationships, friendships, history, live in the 1960s. The characters are so believable. This book made me smile many times, and even laugh out loud and cry a time or two. Although this is a young adult book, I highly recommended for adults as well. You will root for the characters, mourn at their losses, and cheer for their victories.