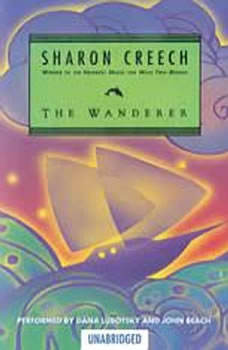 Thirteen-year-old Sophie is the only girl amongst the crew of The Wanderer, made up of her three uncles and two cousins. They sail across the Atlantic toward England, the land of Bompie, her grandfather. The personal journey she takes brings her deeper into a forgotten past than she ever knew possible.

Sophie’s thirteen-year-old cousin Cody isn’t sure why his father brought him along. Everyone, including his dad, thinks he’s nothing but a knucklehead doofus. But behind all the goofing off, he wonders if he has the strength to prove himself to the crew and to his father.

Through Sophie’s and Cody’s travel logs, the amazing experiences of these six wanderers unfold.

Hate That Cat
by Sharon Creech

Return to Miss Stretchberry's class with Jack, the reluctant poet, who over the course of a year encounters new and challenging things like metaphors, alliterations, onomatopoeia, and one mean fat black cat!The Newbery Medal-winning author of Walk ...

The Boy on the Porch
by Sharon Creech

“This quiet novel sings. A graceful profound story for all ages that speaks well beyond its intended audience.” —Kirkus (starred review)Fans of Newbery Medal winner Sharon Creech's Ruby Holler will love this tween novel about open...

In her own singularly beautiful style, Newbery Medal winner Sharon Creech intricately weaves together two tales, one funny, one bittersweet, to create a heartwarming, compelling, and utterly moving story of love, loss, and the complexity of human e...

“A winning tale of love.” --Kirkus Reviews (starred review)Perfect for fans of Charlotte’s Web and The One and Only Ivan, Saving Winslow is an uplifting modern classic in the making about a young boy who befriends an ailing newbor...

The Castle Corona
by Sharon Creech

Long ago and far away . . . There was a castle. But not just any castle. This was a castle that glittered and sparkled and rose majestically above the banks of the winding Winono River: the Castle Corona.And in this castle lived a family. But not j...

This uplifting New York Times bestseller reminds us that if we’re open to new experiences, life is full of surprises.Fans of Newbery Medal winner Sharon Creech’s Love That Dog and Hate That Cat will love her newest tween novel, Moo. Fol...

From Sharon Creech, the Newbery Medal winning author of Walk Two Moons, comes a heartwarming adventure about finding family, and a home, when you least expect it.Ruby Holler is a Carnegie Medal-winning novel, and with its quirky protagonists and ex...

The Unfinished Angel
by Sharon Creech

Peoples are strange!The things they are doing and saying–sometimes they make no sense. Did their brains fall out of their heads? And why so much talking, all those words spilling out of those mouths? Why don't they be quiet?In a tiny village ...