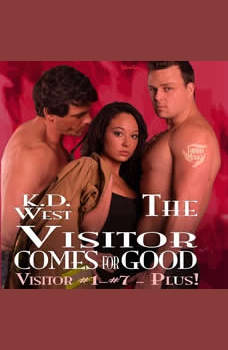 The Visitor Comes for Good: A Friendly MMF Menage Tale

It's the world's oldest story: A girl, her fireman, and her other fireman.

When Lea heads off to Atlanta for a job interview, all she's thinking about is the work. Well, and Sean, her best friend's brother. Sean, the tall, muscular firefighter. With the gentle Southern drawl and the wicked smile. Whose couch she's going to be sleeping on.

Well, actually, whose couch she hopes very much she won't be sleeping on. But it turns out that Andy, Sean's roommate, is another, equally hot Southern firefighter, and so when a visitor — or perhaps two — joins Lea on that couch, it sparks a series of events that none of them could possibly have foreseen.

But that none of them regrets. Not even a little bit.

This collection contains all seven installments in The Visitor Saga —plus the wild sequel!

When she walked back up the stairs to the apartment a couple of hours later, she had in one hand an enormous bag full of barbecue chicken from the same joint she’d had lunch at, with orders of fried okra and corn bread. In the other hand, she swung a bottle of Maker’s Mark, with which she knocked on the door.

Just like the day before, a muffled voice called out, “C’me in! It’s unlocked.”

“Hold on,” said a slightly closer voice, and the door swung open, revealing Sean, who was still wearing nothing but low-slung pajama bottoms.

Andy was sitting at the kitchen table, identically dressed.

“Haven’t you guys even gotten dressed all day?” Lea laughed and gave Sean a sound kiss on the lips.

He looked astonished, but Andy scowled.

“None of that!” burbled Lea, dancing into the kitchen and giving him an equally sound smooch. That seemed to cheer him up. “Tonight, we’re celebrating!” She held up the barbecue and the bourbon.

They were happy to go along with this plan, and were soon all stuffed and pleasantly buzzed. Between the warmth, the Southern humidity, the food, and the alcohol, Lea was getting sweaty, but she couldn’t have cared less. She was hoping to get a whole lot sweatier. Now which of you was my mystery man last night, she found herself wondering as she took off her jacket and tossed it in the general direction of the pullout. And am I going to get him to f—k me again, or am I going to try out the other one. Or…

She looked back at the two men, whiskey-wild thoughts bouncing through her head.

They were both staring at her. At her chest. Both licking their lips.