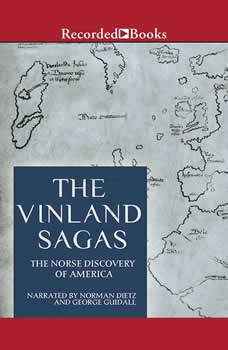 The Vinland Sagas: The Norse Discovery of America

These two medieval Icelandic sagas tell one of the most astonishing stories in the history of exploration-the discovery of America by two Norsemen, Eirik the Red and Bjarni Herjolfsson, over 500 years before Christopher Columbus. A fascinating bit of history and a distinctive piece of world literature, The Vinland Sagas is the definitive record of Europe's first glimpse of the North American continent.

The Gifts Of The Jews
by Thomas Cahill

The Gifts of the Jews reveals the critical change that made western civilization possible. Within the matrix of ancient religions and philosophies, life was seen as part of an endless cycle of birth and death; time was like a wheel, spinning ceasele...

The Conquest of Constantinople - Excerpts
by Geoffroy de Villehardouin

Statesman and soldier Geoffroy de Villehardouin played a leading role in the Fourth Crusade of the 13th century. Medieval knights were led to believe that they could battle their way to Heaven on a road paved by earthly plunder and Christian blood. ...

Jean Froissart (1337-1410) was the world's first great war correspondent, covering the great age of the Hundred Years War. His Chronicles deliver a contemporary perspective on the latest Medieval news-from the crowning of Edward III to the downfall ...

Summary of Killing Lincoln: The Shocking Assassination that Changed America Forever by Bill O'Reilly and Martin Dugard
by Readtrepreneur Publishing

Killing Lincoln: The Shocking Assassination That Changed America Forever by Bill O'Reilly | Book Summary | Readtrepreneur(Disclaimer: This is NOT the original book, but an unofficial summary.)A spectacular coverage of the event that changed America ...

In The War with Hannibal, Livy (59 BC AD 17) chronicles the events of the Second Punic War between Rome and Carthage, until the Battle of Zama in 202 BC. He vividly recreates the immense armies of Hannibal, complete with elephants, crossing the Alps...

The Annals of Tacitus
by Cornelius Tacitus

The Annals, the last and greatest achievement of Tacitus, records the history of the Julio-Claudian emperors from the death of Augustus (14 A.D.) to the reign of Nero (54-68). These are stories of mutiny and murder, of whole armies disappearing beyo...

The Civil War
by Julius Caesar

Here is a rare chance to hear the Roman Emperor speak. In plain, soldierly language, Julius Caesar chronicles his struggle to win the Roman Civil War. Beneath the rhetoric crackles the intelligence of an extraordinary man.

The Day the Universe Changed
by James Burke

When humans understood that the earth was flat and it was the center of the universe, all life revolved around that truth. Then, Galileo introduced his telescope. And with that single innovation, architecture, music, literature, science, politics&md...

A Short History of the World
by Christopher Lascelles

There is an increasing realization that our knowledge of world history—and how it all fits together—is far from perfect. Here, Christopher Lascelles aims to fill the big gaps in our historical knowledge with a book that is easy to follow...