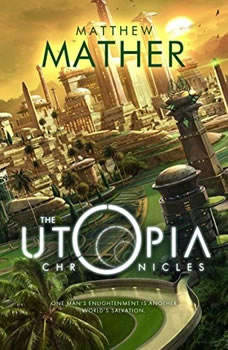 Robert Baxter once reveled in the intoxicating delights of Atopia—the man-made island where humans lose themselves in a world of boundless virtual realities. Now, Bob has returned to immerse himself in this mind-altering, consciousness-sharing refuge from the eroding Earth.But something is very wrong. Bob feels a tidal wave of doom cresting above the pleasure dome that is Atopia. As alternate universes perish, the salvation of all he loves—and all that exists—rests with Bob alone. To save the future, he must journey to the farthest edge of the past, where existence itself began and Atopia’s deepest secrets may lie. Yet even the knowledge Bob ultimately gains may not be a match for an enemy as powerful as a god, and as all-consuming as death . . .