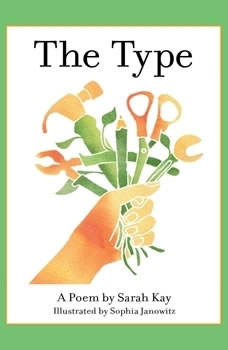 Sarah Kay's powerful spoken word poetry performances have gone viral, with more than 10 million online views and thousands more in global live audiences. In her second single-poem volume, Kay takes readers along a lyrical road toward empowerment, exploring the promise and complicated reality of being a woman. During her spoken word poetry performances, audiences around the world have responded strongly to Sarah Kay's poem The Type. As Kay wrote in The Huffington Post: "Much media attention has been paid to what it means to 'be a woman,' but often the conversation focuses on what it means to be a woman in relation to others. I believe these relationships are important. I also think it is possible to define ourselves solely as individuals... We have the power to define ourselves: by telling our own stories, in our own words, with our own voices."Never-before-published in book form, The Type is illustrated throughout and perfect for gift-giving.

Letter Composed During a Lull in the Fighting
by Kevin Powers

National Book Award finalist, Iraq war veteran, novelist and poet Kevin Powers creates a deeply affecting portrait of a life shaped by war. Letter Composed During a Lull in the Fighting captures the many moments that comprise a soldier's life: driv...

B
by Sarah Kay

A whimsical love letter, a shared promise, a thank you note, and a whispered secret to mothers and daughters everywhere. The perfect gift, B celebrates the bond that exists between a parent and a child. Short, touching, and lovingly performed, it i...

The Truth About Magic
by Atticus

From the internationally bestselling author of The Dark Between Stars and Love Her Wild, Instagram sensation Atticus returns with another romantic and deeply moving collection. The Truth About Magic builds on the pains and joys of romance explore...

How Did This Happen?
by Mary D. Esselman

From the bestselling authors of The Hell with Love, a fierce, funny, touching collection that takes the sting out of "aging while female."

The lead poem in this collection, "Tenebrae: A Memoir of Love and Death," is a lovely bracelet of verse and prose poems that link brilliantly together in a gripping narrative and wrenching emotional journey through the illness and death of his wife....

New Shoes On A Dead Horse
by Sierra DeMulder

The Romans believed that an artist's inspiration came from a spirit, called a genius, that lived in the walls of the artist's home. In her second book, Sierra DeMulder examines her childhood in a small town, heartache, loss, and the possibility of t...

The first collection of poetry from Bunmi Laditan, bestselling author of Confessions of a Domestic Failure and creator of The Honest Toddler, capturing the honesty, rawness, sheer joy and total madness of motherhood. With the compassion and wit tha...

all of it is you.
by Nico Tortorella

Wildly into the Dark
by Tyler Knott Gregson

The most intimate and eclectic poetry collection yet from bestselling author and online sensation Tyler Knott Gregson With loyal fans around the world and across the internet, Tyler Knott Gregson is reinventing poetry for a new generation, using ...