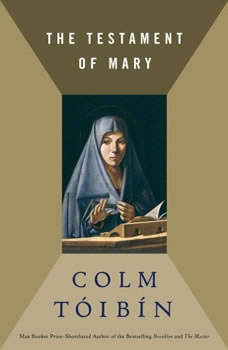 The Testament of Mary

Meryl Streep’s performance of Colm Tóibín's acclaimed portrait of Mary is hailed by the New York Times Book Review as “an ideal audiobook,” presenting the three-time Academy Award-winner in “yet another great role.”Shortlisted for the Man Booker Prize, Colm Tóibín's The Testament of Mary presents Mary as a solitary older woman still seeking to understand the events that become the narrative of the New Testament and the foundation of Christianity. In the ancient town of Ephesus, Mary lives alone, years after her son's crucifixion. She has no interest in collaborating with the authors of the Gospel. They are her keepers, providing her with food and shelter and visiting her regularly. She does not agree that her son is the Son of God; nor that his death was "worth it"; nor that the "group of misfits he gathered around him, men who could not look a woman in the eye," were holy disciples. This woman who we know from centuries of paintings and scripture as the docile, loving, silent, long-suffering, obedient, worshipful mother of Christ becomes a tragic heroine with the relentless eloquence of Electra or Medea or Antigone, in a portrait so vivid and convincing that our image of Mary will be forever transformed. Now Meryl Streep brings Tóibín's tour de force of imagination and language to unforgettable life with “simplicity, honesty, [and] a clarity that draws us into the emotional landscape of the book through the beauty of the writing,” writes Charles Isherwood in the New York Times Book Review. “Streep has an impressive ability to crest the structurally intricate sent­ences Tóibín has fashioned, which sometimes have the flowing, rhythmic cadences of certain passages in the Bible itself,” Isherwood writes of her performance. “Streep’s voice is familiar to generations of moviegoers, but its beauty as an instrument can be appreciated in this context as it often cannot be in films.…Tóibín's exquisite book [is] rendered by Streep with all its detached, quiet, consoling humanity intact.”

Of Mice and Men
by John Steinbeck

Celebrating its 75th anniversary, John Steinbeck’s Of Mice and Men remains one of America's most widely read and beloved novels. Here is Steinbeck’s dramatic adaptation of his novel-as-play, which received the New York Drama Critics̵...