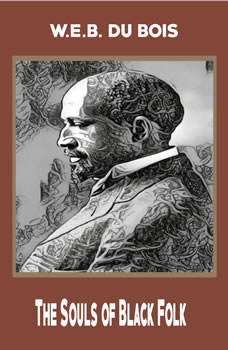 The Souls of Black Folk

William Edward Burghardt Du Bois (1868-1963) is the greatest of African American intellectuals--a sociologist, historian, novelist, and activist whose astounding career spanned the nation's history from Reconstruction to the civil rights movement. Born in Massachusetts and educated at Fisk, Harvard, and the University of Berlin, Du Bois penned his epochal masterpiece, The Souls of Black Folk, in 1903. It remains his most studied and popular work; its insights into life at the turn of the 20th century still ring true.This landmark book is a founding work in the literature of black protest. W. E. B. Du Bois (1868–1963) played a key role in developing the strategy and program that dominated early 20th-century black protest in America. In this collection of essays, first published together in 1903, he eloquently affirms that it is beneath the dignity of a human being to beg for those rights that belong inherently to all mankind. He also charges that the strategy of accommodation to white supremacy advanced by Booker T. Washington, then the most influential black leader in America, would only serve to perpetuate black oppression.Publication of The Souls of Black Folk was a dramatic event that helped to polarize black leaders into two groups: the more conservative followers of Washington and the more radical supporters of aggressive protest. Its influence cannot be overstated. It is essential reading for everyone interested in African-American history and the struggle for civil rights in America.

How Jane Austen Inspire Us All: Essential Writings of Love and Philosophy
by Paula Hawkins

Jane Austen wrote words that commence many successes of women authors today. Although her success came after her untimely death, her words live in me and every female author that devised words of inspiration, love, and imagination. I have comprised ...

On Liberty Audiobook is a philosophical work by English philosopher John Stuart Mill, originally intended as a short essay. The work, published in 1859, applies Mill's ethical system of utilitarianism to society and the state. Mill attempts to estab...

Pedagogy of the Oppressed
by Paulo Freire

First published in Portuguese in 1968, Pedagogy of the Oppressed was translated and published in English in 1970. Paulo Freire's work has helped to empower countless people throughout the world and has taken on special urgency in the United States a...

Beyond Good and Evil
by Friedrich Nietzsche

Flirting Guide: How to Start Conversations and Flirt Like a Pro
by My Ebook Publishing House

When it comes to relationships and dating, there’s no such thing as bad luck. There’s only bad alignment. Want to make an unforgettable first impression? Or learn how to speak in a way that makes you stand out in a crowd? Or find out wha...