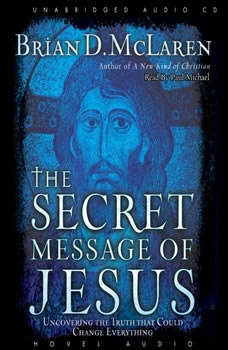 The Secret Message of Jesus: Uncovering the Truth that Could Change Everything

In The Secret Message of Jesus, McLaren clears away the dust of two thousand years of the Christian religion to get to the most important questions facing Christendom: Could it be that the church has misunderstood or, in some cases, intentionally distorted Jesus’ core message? What if Jesus was right—but right in different ways than we ever realized? What if many of us have carried on a religion that somewhere along the way missed rich and radical treasures hidden in the essential message of Jesus of Nazareth? // McLaren calls us to look hard, think deeply, and search long with him . . . even if the answers overturn our conventional ideas, priorities, and practices. // “Through the years, I have frequently had an uncomfortable feeling,” writes McLaren, “that the portrait of Jesus I found in the New Testament didn’t fit with the images of Jesus in the church.” Out of that nagging discomfort arose this ground-breaking book. He writes, “I’d like to share my search with you, and invite you to be a part of it. I don’t want to spoil the ending, but I’ll let you in on this: the farther I go on this search, the more inspired, moved, challenged, shocked, and motivated I become about the secret message of Jesus.”

Can I Really Trust the Bible?
by Barry Cooper

The Bible makes big claims for itself. But do those claims stand up? Aren't the stories just legends? Hasn't the information been corrupted over time? Isn't the Bible full of mistakes? And isn't it culturally outdated? In t...