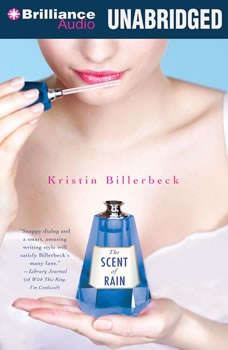 The Scent of Rain

Daphne Sweeten left Paris—and a job she loved—to marry the man of her dreams in the U.S. But when he stands her up on their wedding day, she’s left reeling and senseless. Literally. She’s been trained as a perfume creator and now her sense of smell has disappeared along with her fiancé!She has to figure out why her nose isn’t working, fix it, and get back to Paris. Meanwhile, she’ll rely on her chemistry skills and just hope her new boss at Gibraltar Products, Jesse, doesn’t notice her failing senses. They’ll be working together on household fragrances, not posh perfumes. How hard can it be?As Daphne and Jesse work on a signature scent for their new line, she feels God at work as never before. And the promise of what’s possible is as fresh as the scent of rain.