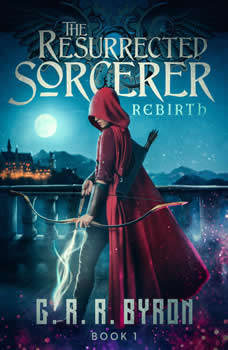 The past repeats itself... Resurrected in the body of his distant descendent, Uz'Riel intends to restore his dynasty back to greatness. Once he had been a hero, a Great Sage who unified humanity against the Demon King. But now the world has fallen back into its petty ways, losing its understanding of magic even as technology based on magical engines roar into existence. Will ambition and a deep knowledge of the past be enough to make the difference? As the bastard son of a weakened dynasty, Izzy—and the ruminating mind of his distant ancestor—must take up the bow and answer the call to fight. As the advanced forces of Chiino and Rassia march into Emery and Amerigo with their steampunk weaponry, peace seems impossible—until an old enemy returns. It will be up to the descendents of the original four heroes to set aside their differences and strike back against the Demon King's legions. But bringing humanity back together again will be harder than it looks—especially since the greatest sorcerer in Amerigo has lost the ability to use magic.