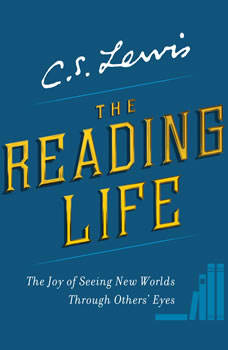 The Reading Life: The Joy of Seeing New Worlds Through Others' Eyes

The revered teacher and bestselling author reflects on the power, importance, and joy of a life dedicated to reading books in this delightful collection drawn from his wide body of writings.

More than fifty years after his death, revered intellectual and teacher C. S. Lewis continues to speak to readers, thanks not only to his intellectual insights on Christianity but also his wondrous creative works and deep reflections on the literature that influenced his life. Beloved for his instructive novels including The Screwtape Letters, The Great Divorce, and The Chronicles of Narnia as well as his philosophical books that explored theology and Christian life, Lewis was a life-long writer and book lover.

Cultivated from his many essays, articles, and letters, as well as his classic works, The Reading Life provides guidance and reflections on the love and enjoyment of books. Engaging and enlightening, this well-rounded collection includes Lewis’ reflections on science fiction, why children’s literature is for readers of all ages, and why we should read two old books for every new one.

A window into the thoughts of one of the greatest public intellectuals of our time, this collection reveals not only why Lewis loved the written word, but what it means to learn through literature from one of our wisest and most enduring teachers.

Master storyteller and essayist C. S. Lewis here tackles the central questions of the Christian faith: Who was Jesus? What did he accomplish? What does it mean for me? In these classic essays, which began as talks on the BBC during World War II, Le...

The Storytelling Animal
by Jonathan Gottschall

Humans live in landscapes of make-believe. We spin fantasies. We devour novels, films, and plays. Even sporting events and criminal trials unfold as narratives. Yet the world of story has long remained an undiscovered and unmapped country. It's easy...

The Abolition of Man
by C. S. Lewis

In the classic The Abolition of Man, C.S. Lewis, the most important Christian writer of the 20th century, sets out to persuade his audience of the importance and relevance of universal values such as courage and honor in contemporary society....

Anyone who has ever loved a book will relish this playful, yet deeply literate collection of essays celebrating the joy of reading. From building castles with books as a child, to the trauma of joining her library with her husband's, the author reve...

Is Shakespeare Dead?
by Mark Twain

Is Shakespeare Dead? is a short, semi-autobiographical work by American humorist Samuel Clemens, better known as Mark Twain. It explores the controversy over the authorship of the Shakespearean literary canon via satire, anecdote, and extensive quot...

A classic work on grief, A Grief Observed is C.S. Lewis’s honest reflection on the fundamental issues of life, death, and faith in the midst of loss. Written after his wife’s tragic death as a way of surviving the “mad midnight mo...