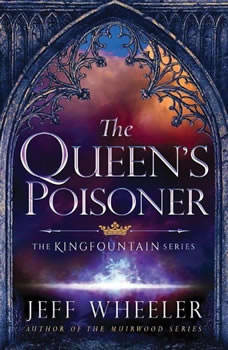 King Severn Argentine’s fearsome reputation precedes him: usurper of the throne, killer of rightful heirs, ruthless punisher of traitors. Attempting to depose him, the Duke of Kiskaddon gambles…and loses. Now the duke must atone by handing over his young son, Owen, as the king’s hostage. And should his loyalty falter again, the boy will pay with his life.Seeking allies and eluding Severn’s spies, Owen learns to survive in the court of Kingfountain. But when new evidence of his father’s betrayal threatens to seal his fate, Owen must win the vengeful king’s favor by proving his worth—through extraordinary means. And only one person can aid his desperate cause: a mysterious woman, dwelling in secrecy, who truly wields power over life, death, and destiny.

Pieces of Hate
by Tim Lebbon

During the Dark Ages, a thing named Temple slaughtered Gabriel's family. A man with snake eyes charged him to pursue the assassin wherever he may strike next, and destroy him. Gabriel never believed he’d still be following Temple almost a thou...

A Whisper of Southern Lights
by Tim Lebbon

Death and destruction follow the demon wherever he treads, and Gabriel is rarely far behind, waiting for his chance to extinguish the creature known as Temple once and for all.But in Singapore during the Second World War, a lone soldier in possessio...

The Ghost and the Gold Louis
by Jamie Sutliff

After a ghost tells her great-granddaughter the tale of the gold coins that purchased her as a slave in 1810, it leads her on the trail to recover the gold Louis coins, which were donated to the Confederate war effort by one of her twin sons. The gr...

A Song for No Man's Land
by Andy Remic

He signed up to fight with visions of honour and glory, of fighting for king and country, of making his family proud at long last.But on a battlefield during the Great War, Robert Jones is shot, and wonders how it all went so very wrong, and how thi...

The Devil You Know
by K. J. Parker

The greatest philosopher of all time is offering to sell his soul to the Devil. All he wants is twenty more years to complete his life’s work. After that, he really doesn’t care.But the assistant demon assigned to the case has his suspic...

Of Sorrow and Such
by Angela Slatter

Mistress Gideon is a witch. The locals of Edda's Meadow, if they suspect it of her, say nary a word-Gideon has been good to them, and it's always better to keep on her good side. Just in case.When a foolish young shapeshifter goes against the wishes...