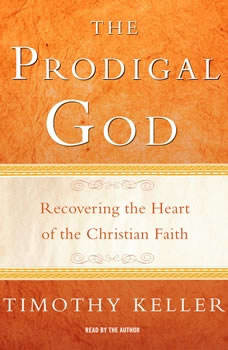 The Prodigal God: Recovering the Heart of the Christian Faith

The New York Times bestselling author of The Prodigal Prophet uncovers the essential message of Jesus, locked inside his most familiar parable.

Newsweek called renowned minister Timothy Keller "a C.S. Lewis for the twenty-first century" in a feature on his first book, The Reason for God. In that book, he offered a rational explanation of why we should believe in God. Now, in The Prodigal God, Keller takes his trademark intellectual approach to understanding Christianity and uses the parable of the prodigal son to reveal an unexpected message of hope and salvation.

Within that parable Jesus reveals God's prodigal grace toward both the irreligious and the moralistic. This book will challenge both the devout and skeptics to see Christianity in a whole new way.

Can We Trust the Gospels?
by Peter J. Williams

Presenting a case for the historical reliability of the Gospels, New Testament scholar Peter Williams examines evidence from non-Christian sources, assesses how accurately the four biblical accounts reflect the cultural context of their day, compare...

Walking on water. Multiplying the fish and the loaves. Raising Lazarus from the dead. The miracles of Jesus may be well known, but they are often treated as nothing more than fanciful tales. Written as a companion volume to The Storytelling God: See...

Jesus in the Present Tense
by Warren Wiersbe

In Jesus in the Present Tense, Dr. Warren W. Wiersbe explores the “I AM” statements of God—from His burning bush conversation with Moses, to His powerful reassurances to the Israelites, to Jesus’s startling claim to be the Li...

Jesus
by A. W. Tozer

Reflections on Christ, from a beloved spiritual writerA. W. Tozer was a man of remarkable knowledge, an avid reader of Christians and philosophers from throughout the ages. But he meditated on the Bible, making him—like John Wesley&m...

Everything the Bible has to say about the gospel is simply an exposition of its central message: Jesus Christ lived and died to save sinners. The gospel is about Him, and it answers Jesus’ key question: “Who do you say that I am?” ...

The Meaning of Marriage Audio Study
by Timothy Keller

Modern culture would have you believe that everyone has a soul mate; that romance is the most important part of a successful marriage; that marriage does not mean 'til death do us part, but merely for as long as my needs are being met; and that when...

The Gospel and Its Ministry
by Robert Anderson

The Gospel and its Ministry' is a classic book in which Sir Robert Anderson deals in fresh and striking terms with the great truths of the Gospel of the Glory of the Blessed God, Grace, the Cross, Faith, Repentance and the Spirit's Work, Substitutio...

The Agony of Love: Six Hours in Eternity
by Chuck Missler and Mark Eastman

What really happened at the crucifixion? How can one who is immortal die? How can eternity be compressed into six hours? What really held Jesus' body to the cross?Chuck explores the hyper-dimensional aspects of a love letter written in ...

He Chose the Nails
by Max Lucado

Linger on the hill of Calvary. Rub a finger on the timber and press the nail into your hand. Taste the tinge of cheap wine and feel the scrape of a thorn on your brow. Touch the velvet dirt, moist with the blood of God. Allow the tools of torture to...