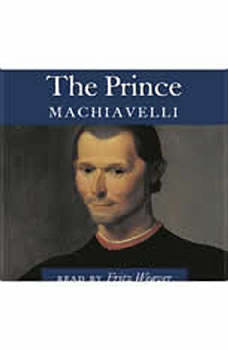 'This political science classic still has the power to shock, just as it did when first published almost five hundred years ago. Fritz Weaver reads in an appropriately detached manner, for it is this air of objectivity regarding the ruthless pursuit of political power that has made Machiavelli's name synonymous with evil. This quality recording begins and ends with ceremonial music, which sets the right tone for a treatise directed to royalty. A masterpiece of prophecy, psychological insight, and forceful prose, The Prince is a classic of realpolitik, stunningly relevant to our times.

Say the word “Israel” today and it sparks images of walls and rockets and a bloody conflict without end. Yet for decades, the symbol of the Jewish State was the noble pioneer draining the swamps and making the deserts bloom: the legendar...

Cookbook Politics argues that cookbooks highlight aspects of our lives we rarely recognize as political—taste, production, domesticity, collectivity, and imagination—and considers the ways in which cookbooks have or do politics, from the...

Suicide of a Superpower
by Patrick J. Buchanan

Pat Buchanan's latest polemic—and his first since Obama's election—exposes the risks America faces today and what those dangers will mean for the country's futureSince Obama took office, conservative pundits have been mainstays on the be...

Witty, informative, and devilishly shrewd, this work is a must-listen for anyone interested in politics and power. The world-renowned philosopher's classic treatise reveals the techniques and strategies for gaining and keeping political control. "Ho...

The Great Degeneration
by Niall Ferguson

What causes rich countries to lose their way? Symptoms of decline are all around us today: slowing growth, crushing debts, increasing inequality, aging populations, antisocial behavior. But what exactly has gone wrong? The answer, Niall Ferguson arg...

Booktrack Edition adds an immersive musical soundtrack to your audiobook listening experience!Say the word “Israel” today and it sparks images of walls and rockets and a bloody conflict without end. Yet for decades, the symbol of the Jew...

On Liberty
by John Stuart Mill

First published in 1859, John Stuart Mill's On Liberty is an exhaustive exploration of social and civic liberty, its limits, and its consequences. Mill's work is a classic of political liberalism that contains a rational justification of the freedom...

In this course of lectures, Professor Hadley Arkes seeks to recall the classic connection between law and morality. Law works by replacing personal choice and private judgment with a public rule enforced on everyone, which raises the question of whe...