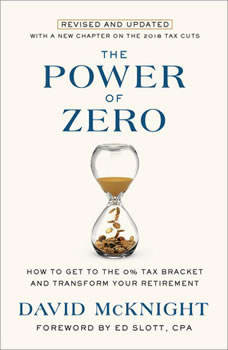 The Power of Zero, Revised and Updated: How to Get to the 0% Tax Bracket and Transform Your Retirement

An updated edition of the self-published book that sold more than 100,000 copies, with a new chapter on the 2018 tax cuts.

There's a massive freight train bearing down on the average American investor, and it's coming in the form of higher taxes.

The United States Government has made trillions of dollars in unfunded promises for programs like Social Security and Medicare--and the only way to deliver on these promises is to raise taxes. Some experts have even suggested that tax rates will need to double, just to keep our country solvent. Unfortunately, if you're like most Americans, you've saved the majority of your retirement assets in tax-deferred vehicles like 401(k)s and IRAs. If tax rates go up, how much of your hard-earned money will you really get to keep?

In THE POWER OF ZERO, McKnight provides a concise, step-by-step roadmap on how to get to the 0% tax bracket by the time you retire, effectively eliminating tax rate risk from your retirement picture. Now, in this expanded edition, McKnight has updated the book with a new chapter on the 2017 Tax Cuts and Jobs Act, showing readers how to navigate the new tax law in its first year of being in effect, and how they can extend the life of their retirement savings by taking advantage of it now.

The day of reckoning is fast approaching. Are you ready to do what it takes to experience the power of zero?

Includes a PDF of charts from the book.

The popular TODAY financial editor Jean Chatzky helps you navigate through the critical challenges and potential catastrophes of personal finance.You've just lost your job. You've got a baby on the way. Your parent has had a stroke. Most people see...

If you are one of the seventy million Americans counting on your 401(k) plan to usher you into a comfortable old age, you're likely to be bitterly disappointed. Rather than benefit the employee, 401(k) plans reward employers, brokers, investment adv...