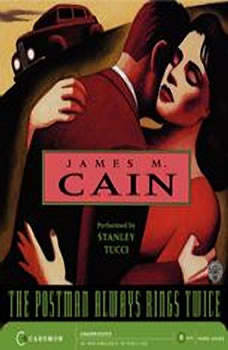 An amoral young tramp. A beautiful, sullen woman with an inconvenient husband. A problem that has only one, grisly solution -- a solution that only creates other problems that no one can ever solve.First published in 1934 and banned in Boston for its explosive mixture of violence and eroticism, The Postman Always Rings Twice is a classic of the roman noir. It established James M. Cain as a major novelist with an unsparing vision of America's bleak underside, and was acknowledged by Albert Camus as the model for The Stranger.Performed by Stanley Tucci

Do you want to listen to Treasure Island? If so then keep reading…One of the best-loved adventure stories ever written, Treasure Island's timeless tale of pirates, lost treasure maps, mutiny and derring-do has appealed to generations of reade...

The Sea Wolf
by Jack London

“The danger lay in the heavy fog which blanketed the bay, and of which, as a landsman, I had little apprehension.”This is the first line in this tale of a man uprooted and thrust into the unfamiliar and dangerous world of the sealing sai...