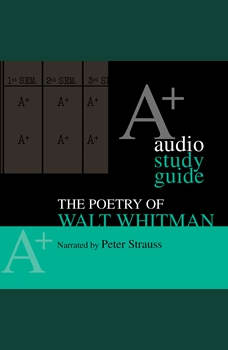 The Poetry of Walt Whitman: An A+ Audio Study Guide

Walt Whitman explores the freedom of the wanderer, the sorrow of the pallbearer, and the spirit of the adventurer in his remarkable collection of poems, Leaves Of Grass. Both an explorer of cultural thought and a lover of sensual pleasure, Whitman champions the cause of common men, and revels in emotional and physical love. In plain and beautiful language, Whitman redefined the world of poetry.This The Poetry of Walt Whitman on A+ AUDIO study guide was written by Kristen Silva Gruesz, PhD, a professor at the College of William and Mary, and a guest lecturer at both Yale University and Harvard University. This program is presented by Peter Strauss, an Emmy Award winner and accomplished actor and producer who recently appeared in the film xXx: State of the Union and the television series Law & Order.A+ AUDIO is the innovative audio study guide series that will help you better understand, appreciate, and enjoy great works of literature. With a dramatic presentation that gives voice to the printed word, you'll experience these classic works as never before. Welcome to A+ AUDIO.

Memoranda During the War
by Walt Whitman

"The real war will never get in the books," Walt Whitman wrote in this diary he kept during the Civil War. Whitman chronicled his visits to Washington, D.C. hospitals where he comforted wounded men and assisted nurses and doctors. This journal, writ...

The Adventures of Huckleberry Finn
by Mark Twain

Mark Twain's classic and controversial novel weaves together adventure, comedy, and satire in the story of Huck's struggle to escape his abusive father, and his companion Jim's fight for freedom in the time of slavery.This The Adventures of Huckleb...

Instant Mind Power
by The INSTANT-Series

(NOTE: Be sure to download the accompanying reference guide upon purchasing. You'll need it to go through the audio. If you can't access it, just contact us directly at audio@instantseries.com.)How to Train and Sharpen Your Mental Abilities Instantl...