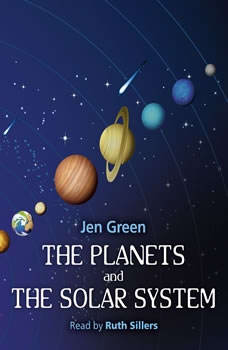 The Planets and The Solar System

Living busily on Planet Earth, we rarely remember that we inhabit only a miniscule part of the universe. In The Planets and The Solar System, Jen Green paints the wider picture, and takes us on a journey across billions of kilometres in our galaxy, from our Sun to near and distant planets. Some, like Mercury, have a molten core surrounded with crust and spin quickly; Jupiter, on the other hand, is a big ball of gas. For 2,500 years, mathematicians and scientists, from Pythagoras to Hubble, have investigated our universe and found that the dimensions, the temperatures and the speeds (light years!) are unbelievably extreme. A fascinating introduction for younger listeners.

The Magic and Mystery of Trees
by Jen Green

An extraordinary children's introduction to the world of trees above and below ground.Learn about the amazing natural science of trees in this nature and science children's book. From the highest branch and leaf down to the complex "wood wide web" o...

Journey back in time to the age of the dinosaurs, the biggest, scariest creatures the world has ever known. Which dinosaurs hunted in packs like wolves? What was the deadliest dinosaur of them all? Which were the very largest species? Not all dinosa...

Has there ever been life on Mars? Will we be living there soon? HOW?! Discover the past, present, and future of the mysterious red planet in this non-fiction book for kids.The launch of Mars rovers by NASA, Europe, and China in 2020 will reveal more...

From writer Stacy McAnulty, Mars! Earthlings Welcome is a light-hearted nonfiction audiobook about the red planet—told from the perspective of Mars himself...Meet Mars! The red planet. Planet Marvelous. Favorite sibling of Earth (or so he clai...