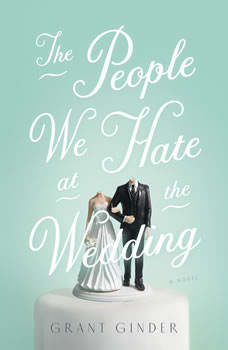 The People We Hate at the Wedding

"It’s for the same audience that flocked to The Nest, Where’d You Go, Bernadette? or dare I say a little book you might be a fan of, Crazy Rich Asians."— Kevin Kwan, New York Times bestselling author of Crazy Rich AsiansEntertainment Weekly's Summer Must-ReadA Publishers Weekly BEST SUMMER BOOKS, 2017Redbook's 10 Books You Have To Read This SummerRelationships are awful. They'll kill you, right up to the point where they start saving your life.Paul and Alice’s half-sister Eloise is getting married! In London! There will be fancy hotels, dinners at “it” restaurants and a reception at a country estate complete with tea lights and embroidered cloth napkins. They couldn’t hate it more. The People We Hate at the Wedding is the story of a less than perfect family. Donna, the clan’s mother, is now a widow living in the Chicago suburbs with a penchant for the occasional joint and more than one glass of wine with her best friend while watching House Hunters International. Alice is in her thirties, single, smart, beautiful, stuck in a dead-end job where she is mired in a rather predictable, though enjoyable, affair with her married boss. Her brother Paul lives in Philadelphia with his older, handsomer, tenured track professor boyfriend who’s recently been saying things like “monogamy is an oppressive heteronormative construct,” while eyeing undergrads. And then there’s Eloise. Perfect, gorgeous, cultured Eloise. The product of Donna’s first marriage to a dashing Frenchman, Eloise has spent her school years at the best private boarding schools, her winter holidays in St. John and a post-college life cushioned by a fat, endless trust fund. To top it off, she’s infuriatingly kind and decent.As this estranged clan gathers together, and Eloise's walk down the aisle approaches, Grant Ginder brings to vivid, hilarious life the power of family, and the complicated ways we hate the ones we love the most in the most bitingly funny, slyly witty and surprisingly tender audiobook you’ll listen to this year.

The bestselling author of Downtown and Colony brings us the story of a model wife who throws caution to the wind by joining her daughter and sister for a trip along the San Andreas fault...just as an earthquake hits. The quake strands them for days...

In the vein of Richard Russo and Tom Perrotta, a gripping, suspenseful, and gorgeous debut novel--told hour-by-hour over the course of a single day--in which a husband and wife try to outrun long-buried secrets, sending their lives spiraling into c...

To Be Sung Underwater
by Tom McNeal

Judith Whitman always believed in the kind of love that "picks you up in Akron and sets you down in Rio." Long ago, she once experienced that love. Willy Blunt was a carpenter with a dry wit and a steadfast sense of honor. Marrying him seemed like ...