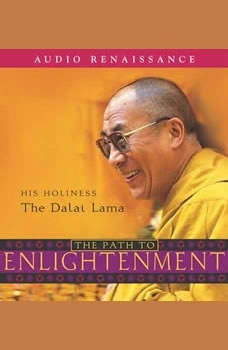 The Path to Enlightenment

In this extensive lesson, Tenzin Gyatso, the Fourteenth Dalai Lama, beautifully elucidates the meaning of the path to enlightenment. His discourse arises from the Third Dalai Lama's brilliant and powerful work, Essence of Refined Gold, a classic text that summarizes the meaning of all Buddha's teachings. The subject of Essence is the Lam Rim, a term that literally means "stages on the spiritual path."Through his insightful exploration and interpretation of Essence of Refined Gold, the Dalai Lama speaks directly to the listener, offering spiritual advice, personal reflections, and scriptural commentary. He also describes in practical terms the essential instructions the student must follow to attain enlightenment.With this program, you can explore the depths of your consciousness and ultimately see the world and yourself in a totally new light. Its direct approach and lucid style make The Path to Enlightenment one of the most accessible introductions to Tibetan Buddhism ever published.