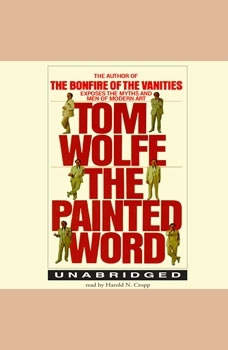 No one skewers the popular movements of American culture like Tom Wolfe. In 1975, he turned his satirical pen to the pretensions of the contemporary art world, a world of social climbing, elitist posturing, and ingeniously absurd self-justifying theorizing. He addresses the scope of Modern Art, from its founding days as Abstract Expressionism through its transformations to Pop, Op, Minimal, and Conceptual. In the process he debunks the great American myth of Modern Art in an incandescent, hilarious, and devastating blast. Wolfes style has never been more dazzling, and his wit never more keen.

As the producer of a prime-time TV newsmagazine, Irv Durtscher fancies himself the Federico Fellini of television journalism. For who else can draw 50 million viewers, satisfy the network's gluttony for profits, and advance the cause of social justi...

Radical Chic and Mau-Mauing the Flak Catchers
by Tom Wolfe

In these two devastatingly funny essays, Tom Wolfe examines political stances, social styles, black rage, and white guilt in our status-minded world. In These Radical Chic Evenings, Wolfe focuses primarily on one symbolic event: a gathering of the ...