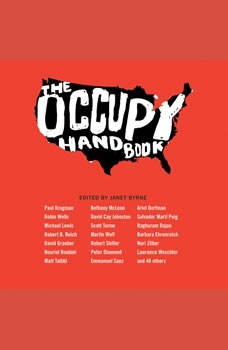 Analyzing the movement's deep-seated origins in questions that the country has sought too long to ignore, some of the greatest economic minds and most incisive cultural commentators - from Paul Krugman, Robin Wells, Michael Lewis, Robert Reich, Amy Goodman, Barbara Ehrenreich, Gillian Tett, Scott Turow, Bethany McLean, Brandon Adams, and Tyler Cowen to prominent labor leaders and young, cutting-edge economists and financial writers whose work is not yet widely known - capture the Occupy Wall Street phenomenon in all its ragged glory, giving listeners an on-the-scene feel for the movement as it unfolds while exploring the heady growth of the protests, considering the lasting changes wrought, and recommending reform. A guide to the occupation, THE OCCUPY HANDBOOK is a talked-about source for understanding why 1% of the people in America take almost a quarter of the nation's income and the long-term effects of a protest movement that even the objects of its attack can find little fault with.

Ethereum: A Concise Guide for Understanding the World of Cryptocurrencies and the New Finance World
by Bill Rogers

Enjoy Massive Returns on Your Ethereum Investments!Do you want to enter today’s growing cryptocurrency markets – but feel overwhelmed by the tech lingo that surrounds this opportunity?Don’t worry – it’s far simpler than...

Looking for a step-by-step guide packed with proven strategies for drastically boosting your chances of success? Then this is the book for you!You can avoid common mistakes, this incredible guide is your all-in-one ticket to the world of day trading...

Blockchain Basics: A Concise Guide for Understanding the Blockchain Revolution and the Technology Behind It
by Bill Rogers

Unearth the World-Changing Secrets of Blockchain Technology!Inside this audiobook, you’ll find out what blockchains are, how we use them today, and their potential for changing the banking industry as we know it!In simple, easy-to-understand l...

Bitcoin: A Concise Guide for Understanding What Bitcoin Is and What you Can Do with It
by Bill Rogers

Learn How To Start With The Largest Cryptocurrency In The World!Have you ever heard of cryptocurrency? How about Bitcoin? The chances are that you have heard of these and you may be wondering what are those. Well, wonder no more!In this book, you ar...

Do you want to generate passive income and make your money work for you? Here’s how to start investing in the stock market and achieve financial freedom!The stock market is all about taking risks. Big companies do not engage in swing trading f...